On Thursday, 16th of February 2017, pupils from the Primary School of “Kato Kastritsi” located within the University Campus, came in the Library and Information Center of the University of Patras  to take part in the Intercultural Communication workshop. In particular, 16 Erasmus pupils from Ireland, Germany, Poland and Spain together with 15 Greek pupils, who host them in their houses and their international and Greek teachers were presented the concepts of culture and communication.

Then the pupils were divided into three groups, namely the groups of Japanese tourists, USA tourists and Greek professionals in tourism. Each group was moved in a seperate room in order the  teachers to coach them how to act on their roles following the characteristics and stereotypes for each of the above groups. And the performance begun: 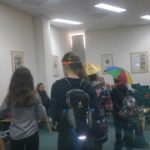 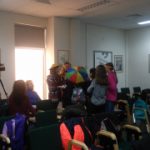 The aim of the workshop was dual: first, to understand the concept of intercultural communication, which they have already been performing with their schoolmates; second, to enable them to prepare vacation packages within the frame of the tourist agency, which is the final project of the particular Erasmus+ programme.

The workshop was organized by the Lab of Greek Language and Culture under the guidance of Mrs. Evgenia Arvaniti, Assistant Professor of the Educational Sciences and Early Childhood Education. Mrs. Katerina Giannouli, graduate of Primary Education Department and travel leader in TUI was one of the tutors of the workshop.