week there are several activities organized to improve cultural experience of students.

We will start our tour at 09.30 in the entrance of St. Andrew’s Cathedral (last stop of the train to Patras), where we will talk about Byzantine and Christian orthodox architecture. We will walk through the pedestrian street of Riga Fereou to explore the classic architecture of 19th and beginning of 20th century.  We will pass through King George square going up to the old city. We will visit the Roman Odeon (theatre) “home” of Patras International Summer Festival, Roman racing track and Turkish baths Hammam and we will end our tour in the city’s roman – medieval castle.

There will be some surprises in between the different sights.

The facilitator Mr. Grigoris Mikronis, a great performer himself, will lead students’ steps to the music of popular and folklore dances. The first lesson will take place  in the University’s gym, on the first floor, at 17.30. 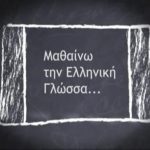 What are the benefits?

Exchange international students have the chance to learn a quite old language (the oldest written evidence of the Greek language dates to between 1450 and 1350 BC), whose alphabet is already known from mathematics.

It is estimated that English has borrowed around 100,000 words from Greek, which makes up about 12% of the English vocabulary. This Greek is used mainly in science and philosophy, but there is also  a great number of everyday  English words which  have their origin in  the language of Homer.

In this lecture, the professor of English language Mrs. Alexandra Lotsari-Groumpou will show some unconceivable, roundabout and surprising ways that Greek words have travelled through time and through different languages to end up becoming English.

After the lecture, you students be able to spot the links between English and Greek and learn more about the etymology of English words and even in their own language.